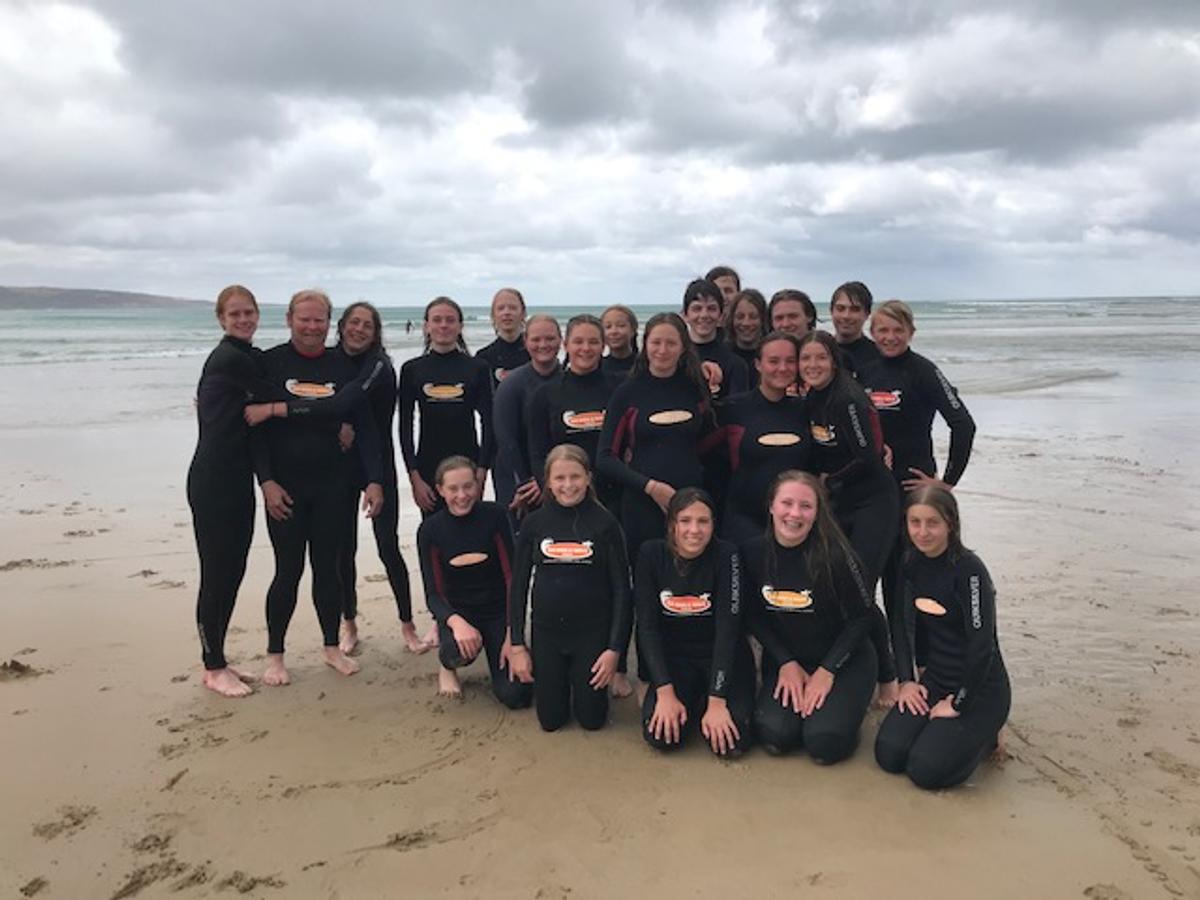 From late shopping for food, packing clothes and waking up earlier than usual, to the exhausting mountain biking trail, run-swim-runs and surfing waves in kayaks and atop surfboards, the second of two Advance camps in 2019 provided us with a lot to remember going into our Surf Rescue Certificate exam on Monday, so let’s take a look back at the exciting and not so exciting moments from this camp.

On the morning of Wednesday when we arrived at one of the campsites around Lorne, we hastily set up our tents and got to eat a short lunch, before getting our bathers on, and taking a trip to Anglesea beach for some attempts at surfing. Although in theory the task seemed like one of easy achievement and Mr Evans was quick to show us how it’s done, we were pleasantly treated to some spectacular high speed falls into the water, face first. Having finished our surfing lessons, going through the struggle of taking off our wetsuits, we packed up and were on our way back to camp.

At the campsite we all had showers, cooked our dinners and once we had eaten them, set out on a night walk. The high gradient strip of trail provided us with much to tackle, as rocks, roots and just the general bush were quite the annoyance. The sun setting, making our lives a whole lot harder, didn’t help either, at least for those unlucky to not have a flashlight.

Despite the steep and bumpy trail, we were treated to some spooky stories by Mr Evans about ¾ of the way around, on a lookout that provided possibly the best ocean view imaginable. The road back to the campsite was the usual windy bit of Great Ocean Road separating Anglesea and Lorne. Getting to camp some of us realised how quickly time flies, as we were already going to sleep by 10:40, despite the 10 hours we had already been here.

With all of us awoken and having eaten breakfast, our next stop was Cosy Corner in Anglesea for sea kayaking. At first glance this seems like something strange and maybe impossible, but as we had already visited the camp in March this year, we knew exactly what was going on. A kayak would be manned by 2 people, than paddled out past the breaking waves, and at speed would travel back into shore as a wave would carry it back in. Or so in theory. Once again we had a great amount of laughs and giggles watching each other commit the well known “capsizing kayak”. However not all went horribly wrong for everyone, Mr Evans was once again on top of his game, surfing waves left, right and centre. The session lasted for 2 hours, something I can say is not as easy as it seems. After having to pack up the kayaks and equipment, we heard the magic words; “Run Swim Run”. One of the instructors there swam around 30 metres out to sea, we would have to go there and back, to our relief, it didn’t provide much of a challenge, because it was very shallow. Nevertheless, we knew this wasn’t the last time we’d hear those words. Instead of going back to camp to eat lunch, we had the opportunity to delve into Anglesea’s bakeries and cafes. Dim sim sales went up a few times that day. Anyway, straight after that, we drove to a place somewhere in Anglesea for our mountain biking session.

With the arrival of our instructors, having battled the electronic gearing, and being told this was a 16 kilometre trip, we set off through bushes and along a trail, one which gave us logs, branches, and roots. This did provide us with the opportunity to embarrass ourselves as some of our group completed some slow falls, some more than others. Half way stop would be Bells Beach carpark, a place 8-9 kilometres away, but we didn’t care, we were all having fun cruising along the trails, hopping over bumps and fallen logs… Now, having battled the heat and flies, having jumped over everything standing in our way, the view that opened up from Bells Beach was spectacular! But soon we were on our way for another, this time less gruelling journey to Torquay. The last sections of the trip were a series of mostly downhill walking tracks along the beaches. Nevertheless, the uphill sections weren’t easy to handle, but we all got there. After we got back to camp all of us cooked our dinners, ranging from sausages with onion, all the way to easy mac and cheese. Having eaten dinner, taken showers, packed up some of our clothes for the trip tomorrow we got ready for our signals test. Our test consisted of having to remember all the SLSA flags signals, alarms and board signals. In total we only received an extra 6 run swim runs then took a quick walk up to a park in Lorne to play games like sardines and 40-40. When we got back we had to get ready for an early wake up and a trip to the beach.

With the weather at 15 degrees, we travelled to Lorne main beach after a short breakfast for our run swim runs. As Mr Evans was kind in the morning, instead of doing 14 run swim runs, he only made us do 2. The water as you can imagine wasn’t pleasant to say the least. After completing 2 run swim runs, we went back to camp and packed up all our tents and set off back to Mordialloc College.