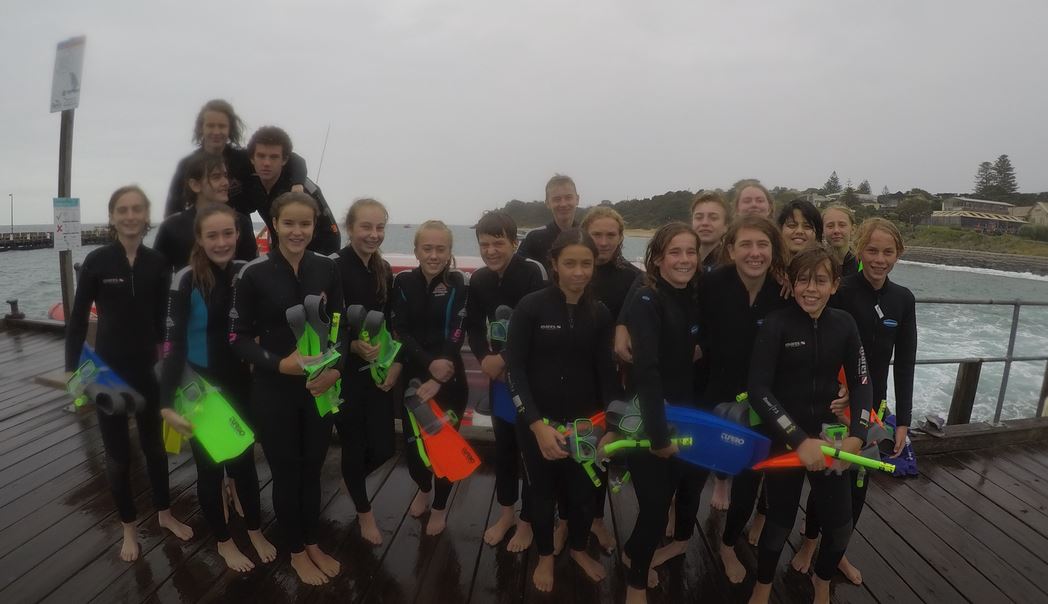 The day started meeting everyone at school early and catching the school bus to Portsea pier. It
wasn’t the nicest day to go as while we were on our way down to the pier, it was spitting and it
was dark and cloudy. When we arrived at Portsea, we hopped off the school bus and went to the
park for a quick snack. We met up with the people who were running the day and got sized up for
wetsuits, fins and masks. After we all got into our wetsuits we had a small safety briefing and
headed down to Portsea pier. It was really choppy and cold.

We all boarded the boat and had another safety briefing. It was so wavy and the boat was going up and down on every wave. From Portsea pier we went to our first stop, Pope’s Eye. As soon as we got there, we saw a seal and her babies splashing around then we turned and saw some dolphins! We all jumped off the boat and it was freezing. We stayed in a group and swam around Popes Eye. We saw some huge fish and sea stars. Some areas were deep and you couldn’t touch the bottom.

After swimming and looking around it was time for the next stop, swimming with the seals at Chinaman’s Hat! Chinaman’s Hat is man made and the young and old male seals live there. The seals smelt so bad and there was so many of them. We all jumped in, it was choppy and a bit hard to swim through the waves. At the start it was a bit disappointing because the seals weren’t jumping in and not
coming near us but then all of a sudden so many were in the water and playing with us!
If you rolled around they would copy you and it was so cool. It was awesome to get so close
to them and they would swim around you, but the seals weren’t the only sea creature there! If you
looked down at the bottom there were heaps of sting rays swimming beneath us! That was a bit
nerve racking but the water was so deep it was fine. I’m pretty sure everyone’s favourite stop was
the seals. As we left to go back to the pier some people were waving bye to the seals and they
were waving back! When we got back we got our wetsuits off and got back on the bus to have
lunch at Sorrento. It was such a good opportunity and experience snorkelling at Popes Eye and at
Chinaman’s Hat, I would definitely do it again.