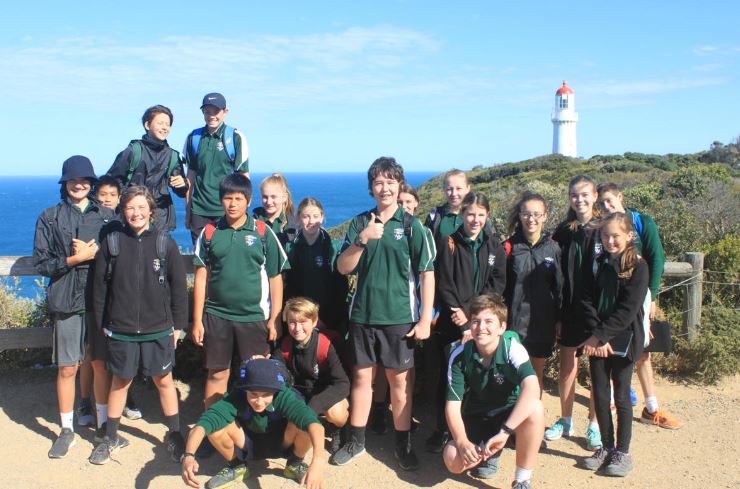 On  22 March 8G and 8H went to Cape Schanck for our current project, Surf and Turf. The day started off with us hopping on a bus for the 1-hour drive to Cape Schanck. The two classes then split in two after a short walk up to a lookout over the ocean. It was a very nice view. Our class then proceeded to walk down the boardwalk to a flat spot where we could sit down and complete our booklets, however the wind had other ideas. It was crazy! If we hadn’t have had clipboards we all would’ve lost the pieces of paper. It’s a miracle that no one did. These workbooks were used as research tools for our project. From our lookout point we could see the entire coastline around Cape Schanck.

Once we finished our first task and 8H had finished their little expedition around the rocks at the bottom of the mountain, it was our turn. The walk down there was around 600m long but didn’t take very long. Again, the wind didn’t help. It almost pushed us over the wooden rails on either side. We all dreaded the walk back up because the boardwalk all the way at the top of the mountain looked miles away. It was something like 22 flights of stairs and some pretty long and big ramps. While we walked along the boardwalk we could see all the different preservation strategies that the park rangers had in place to protect the landscape and to stop erosion and degradation. These included support structures, signs and new native flora and fauna.

The rocks at the bottom were pretty sketchy but the views of the ocean, cliffs and rock pools made up for it. They were very beautiful. We looked around for a bit at the various rocks, landforms and landscapes before walking back over to the other side of the boardwalk. The rocks there were even worse. You couldn’t take one step without 20 or more of them falling out from beneath your feet. The side that we started on had some very nice rock pools and caves that were in the distance but this side had a smaller cave that was really close and huge cliffs made of solid rock. While we were researching the landscape we discovered a sea arch, a sea stack and a potential blowhole! The colour of the rocks showed us the history of Cape Schanck. There was evidence that it was a volcanic landscape from thousands of years ago.

On our walk back to the bus, we took a short walk to an open field that was near the lighthouse. The lighthouse is used for recreational and commercial purposes, with tours happening throughout the year. It was pretty amazing to see. Although we did not see any evidence of the Aboriginal culture around Cape Schanck, you could feel that it was a pretty special and spiritual place. Angel Cave is a cultural and spiritual place for Aboriginals in the area, often used as a sacred meeting place.

The main objective of going was to see in person some different types of rocks, landscapes, landforms and rock formations that we have been studying in class. It was definitely worth going and very fun and educational. It’s great to interact with what we are learning about in school.