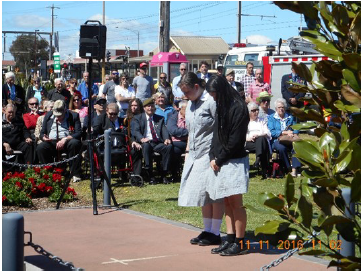 Mordialloc College was invited on behalf of the Longbeach RSL Sub Branch Committee and Members to attend their Remembrance Day service on Friday 11 November. Our SRC reps who attended were Sylvia Alter and Annie Ea and they were each privileged to be able to pay their respects by laying a single rose. Over 100 people attended the service and it was a humbling experience to watch all the past and present soldiers and members of the community place their roses too.

We were also given a speech about how important this day was many years ago and why it is acknowledged every year. We were told it marked the armistice signed between the Allies of World War 1 and Germany at Compiegne, France, for the cessation of hostilities on the Western Front of World War 1, which took effect at eleven o’clock in the morning on the 11th day November 1918. This event is known to us as Remembrance Day.