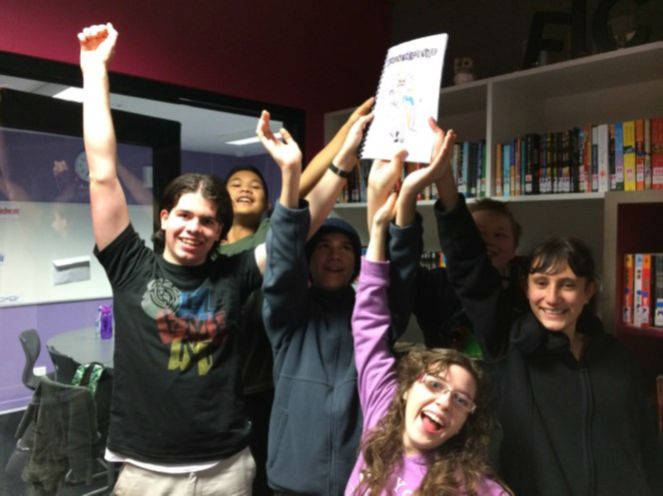 Last week was English Week at the College which featured events such as a school wide Spelling Bee, the Book In A Day competition, heaps of great activities in the Hub and of course the traditional staff verses student debate.

After years of being defeated in the debating the staff were finally victorious, successfully proving that ‘the book is not always better than the film.’

The Book in A Day competition is an Australia wide writing marathon where teams work to write children’s books in 12 hours and to raise funds for Children’s Hospitals in each Australian State. A copy of each finished book is donated to the hospital library.

This year Mordialloc College entered 2 teams who met weekly for a term to prepare for the competition. Our teams were given a random setting, two human characters, a non-human character, an issue and five random words at 8.00am on Tuesday morning and then had until 8.00pm to write and illustrate a book that had to be at least 4000 words long!

The teams worked incredibly hard to produce 2 fantastic books in the timeframe. The Ty10s wrote “Finding Harvey” and The Incongruous Chickens created “The Hybrid’s Bite”.

Both books are on display in the Hub.

We have until August 31 to keep fundraising for the Royal Children’s Hospital and to meet our target of $240 per team. Donations can be made by contacting the general office on 9580 1184.

We are also selling colour, bound copies of the book to assist fundraising at $5 each. These can be ordered and paid for at the general office.

A big congratulations to our teams:

Thank you to all the staff and students who participated in activities throughout English week.