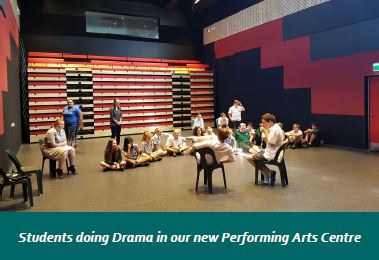 The retractable seating has now been installed in the Performing Arts Centre and looks fantastic! We still have lighting, the sound system, projector and curtains to go but it is a functional teaching space for drama and music.

At this stage, the official opening of our Performing Arts Centre by our Education Minister, James Merlino and our local member, Tim Richardson, has been scheduled for Monday 24 April at 9am.

There has been a hold up with the preparation of the site for our new competition sized netball and basketball stadium which is to be built over Terms 1, 2 and 3.

Required bearing and compaction testing, including additional testing requested by the structural engineer, of the soil and ground conditions did not achieve the results to allow us to proceed with construction. This has put the project three weeks behind, for the footing/foundation redesign to take place and the current removal of soil to be replaced with more suitable soil and controlled fill which will provide greater stability.

I am continuing to work with the City of Kingston on the potential expansion of our stadium to two or three courts. MINX Architecture has presented their feasibility report on the plans and costings of the additional courts and provision of 100 car parks to service the three courts. Sport and Recreation and facility development representatives have prepared a report to be tabled at the Council meeting on 27 March.