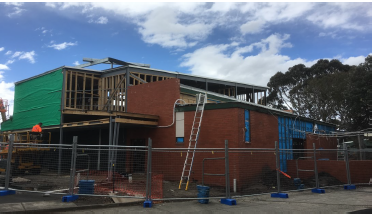 If you have visited the school recently you will have noticed great progress has been made with the construction of our Performing Arts Centre and new canteen. All is on track to have this completed by the end of the school year with occupation from the first day of school next year. We have received $750,000 in additional funding from the State Government to build a competition grade sized netball gymnasium which is a third bigger than what was originally planned for in a basketball sized stadium. This has required the architects to do some replanning and re-costing for this expanded facility. The contractors take over occupation of the hall from 9 December. For at least the first half of 2017 we will be without an indoor facility for whole school assemblies and indoor PE activities. However, we can look forward to our new multipurpose stadium!